Hey kids and kids at heart! Happy 4th of July!

The 4th of July is our country’s official birthday! So when we celebrate it’s like having a huge party for freedom. You see, America was formed by a group of people who wanted to worship God without the British Government telling them what to do! They wanted religious freedom!

It was first called Indepence Day!

How many of you love seeing fireworks? I do! So many colors and designs in the sky although I have to admit I sometimes cover my ears because they are so loud.

Did you know that fireworks as a tradition on July 4th, date all the way back to the year 1777? That’s when John Adams, the second president of the United States, wrote a letter to his wife Abigail telling her that he wanted independence day to be celebrated with pomp, parade, shows and illuminations. That’s lights.

Nothing lights up the sky more than fireworks, huh?

That’s probably why American’s spend over 1 billion dollars a year on fireworks and most of those are bought by people like you and me.

Here’s another fun fact. Did you know that there’s something written upside down on the back of the declaration of independence?
And NO it’s not a treasure map although that would be fun!
It’s a message that reads “Original Declaration of Independence dated 4th of July 1776!

When I was a kid we celebrated the 4th of July by eating watermelon and hot dogs. Lots of them.
Did you know that on this holiday American’s eat over 155 million hot dogs??
Wow that’s a lot!!! My tummy hurts already.

Today, as you celebrate with your family and friends remember to say “Happy Birthday America”

And say a little prayer for all the people who work very hard to keep America free.

See you next time as we continue our summer favorites. 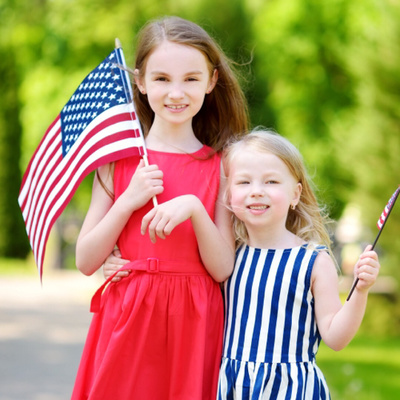